Global Water: How Big Was Barry?

In the 30 days since the first post regarding global fluids and volumes, several stories around the economic impact of liquids have emerged – but the dominant one right now in the US is around the impact of Hurricane Barry on the Mississippi river basin. 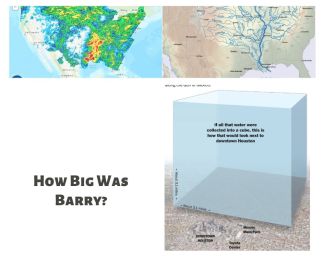 In 2017 the Washington Post estimated that Hurricane Harvey deposited over 125 cubic kilometers of rainfall in the US on to four states (TX, LA, TN, KY) that receive a total of over 20,600 km^3 of rain per year (less than 1% of their annual rainfall total).  Based on the path of the hurricane and very rough estimates based on US government data – I estimate that Barry was twice the size, making it 250 km^3 of water.  In comparison – the annual discharge of the Mississippi is 151 km^3.  As always original data is available here in Google Sheets.

These metrics pail in comparison to the stocks of fresh water held frozen in the Antarctic and Greenland ice sheets – 26.5 and 2.8 million km^3 respectively.  Estimates about these volumes and rates of change continue to fill the news.

At the beginning of the month, the Philadelphia Energy Solutions (“PES”) refinery – with 300,000 barrels per day, was shut down after an explosion.  This came on the night of a heavy rainstorm, depositing 3″ of rain in the city – for a total of 180 million barrels, more than the 110 million produced at PES.  As part of that same storm, an inch of rain fell on Massachusetts – nearly 4.4 billion barrels.

Third party analysis of US Military spending showed that it consumed nearly 270,000 barrels per day of fuel, which would make it a larger user than most countries.