Dan Carlin’s Hardcore History has a fantastic five-part series on the “Wrath of the Khans.”  Carlin’s fundamental point was to create a contrast to some popular histories Genghis Khan, which gloss over the pain and suffering created by the Khans and instead focus on the societal benefits they enabled.  Over 8 hours, Carlin does a great deal to contradict the writings of Jack Weatherford in his book “Genghis Khan and the Making of the Modern World.”

One area where both authors agree is the tremendous military advantage that the Mongols had over their peers.  Carlin frequently makes the comment,

It was as if the Mongols were a major league team in the sport of war, and all of their opposition was playing in the minors. 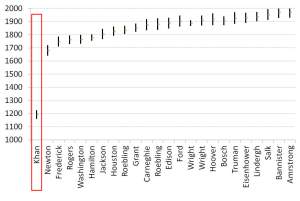 Genghis Khan’s life span is a lot earlier than everyone else on the current biography list.

The Mongols had better discipline, better military engineers, better equipment, and they had executed modern maneuver warfare in a day where their opponents were stuck defending walled cities.  It was not a fair competition and their victories were overwhelming and common.

When I worked as an investor this was the kind of opportunity that you looked for.  We would frequently interview many teams all investing in the same space, and you could quickly tell if there was a dominant team.  The interaction felt different.  They had developed an internal language around the space they were pursuing.  Their knowledge of the space wasn’t academic – they were deeply intimate with the space they were investing in and had a gut feel for how the supply chain would develop.

These are the teams that you want to work with – the ones that are so much better than the opposition that it almost feels unfair.