The meadow voles we found each morning in our traps were tiny, hardy animals who endured the weighing and tagging before being re-released. There were thousands of them in the fields of Blandy Farm or Mountain Lake, the field research centers at UVA where we were performing research as part of our undergraduate degree programs.  The field mice fed on the seeds and fruits of the grasses and shrubs, storing food for the winters in their burrows. The burrows and seed travel were essential to healthy populations of the grasses and other fauna. Everything played together in a food web. Our sensors were advanced for the 1990s – the size of a clothing iron, they picked up the movements of specimens we tagged and released. 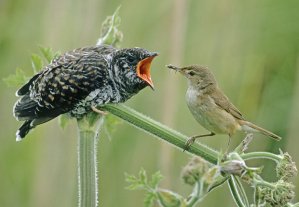 The farms and research centers had plots that systematically studied forest succession going back 200 years – mapping which new plants and animals returned to, or fled from, forest land that had been cleared while the Founding Fathers of the US were still alive.  Mice populations would boom when trees were cut and grass could grow high, providing them with shelter.  As the trees grew tall, they gave grass-killing shade and provided perches for owls and other predators of mice.  Too many owls and the mice are gone, which then hurt the owls.

Imagine the happy industry like the European magpie, with a growing clutch of new eggs (or future businesses) that it is happy to see mature.  But then the cuckoo shows up, representing venture capital.  The cuckoo lays its egg in the magpie’s nest and proceeds to fly away.  The cuckoo hatchling is bigger than the magpie brood cohorts.  It squawks the most, takes up space in the nest, many times pushing the offspring of the magpie out where they fall to their doom.  This is bad for the magpie, which raise the cuckoo as their own.

The cuckoo also needs the magpies to reproduce.  A population of cuckoos depends on the magpies, without which, there are no more cuckoos.

In the 2000s every ‘good’ buyout shop would talk about their database of companies and how it provided a proprietary sourcing angle.  Such data is easily available now on a subscription basis.  At the time the Internet was still a novelty.  The population of buyout-worthy businesses was over hunted, like the passenger pigeon or the American Bison.  Too many predators were released and they hunted their target population to the point where few are left.

It takes a great deal of time for populations in biology to mature.  Different, emergent behaviors develop over time.  It took decades for the buyout population which was harvested in this time period to develop, and the one that comes next will grow up in a very different economic environment.

[Seeing a group like Foundry support Tech Stars and bring in people like Chris Heivly is great.  The cuckoos need the magpies.  The populations play together.]

Find me on twitter @flybrand.
View all posts by flybrand1976 →
Image | This entry was posted in Disruption, Industry, Innovation, VC. Bookmark the permalink.
%d bloggers like this: