Reading and Listening to Revolutionary America

The American revolution is fascinating from a political, military, economic and social standpoint.  I didn’t fully appreciate its importance until moving to Virginia for college.  When reading, listening and learning about this time period, I look at things in three phases – the prelude to revolution, the revolution itself, and the final revision brought forward as Articles of Confederation gave way to the Constitution.  The collection of individuals from states of very different cultures that came together to win the war and stabilize the peace make for fascinating case histories given their very different experiences.

War on the Run, written by John Ross, is the story of Robert Rogers, the one English commander the Americans pre-emptively detained rather than face him in battle.  Washington himself learned the lessons taught by Rogers in the battles he won in the American theatre of the Seven Year’s War, known in the US as the French and Indian War.

Tuscarora War, by David La Verre (10 hours) tells the story of a series of raids and battles in North Carolina beginning in 1711.  Understanding the violence, roles of various immigrant groups and dependence on European resources for defense of the common purpose provides a framework for many of the dynamics that would lead to the revolution.

Benjamin Franklin.  Franklin was the world renown scientist and master of media who had personally attempted to let London know the scale of the schism with the colonies.  Isaacson’s biography (25 hours) covers his political, commercial and scientific achievements, as well as his tremendous shortcomings with his own family.

George Washington.  The most current popular biography of Washington is Chernow’s Washington: A Life.  The unabridged audiobook comes in at over 40 hours and was released in 2010.  Like Jefferson and James Madison, the original Washington home, Mt. Vernon, is a fascinating historical site to visit. 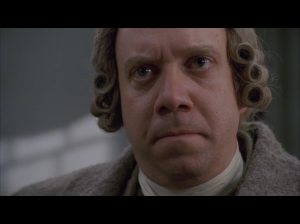 John Adams.  The only Founder with a recent long form HBO mini-series to his name, Adams is best covered in the McCullough biography (30 hours).  This serves as the basis for the television effort.  Adams vs. Jefferson: The Tumultuous Election of 1800 by John Ferling (12 hours) shows the growth in political parties that came from Washington’s departure from office and how the increased use of methods developed by Burr during the Revolutionary War to maintain the peace were now crucial to attaining power.

Thomas Jefferson.  Dumas Malone‘s Pulitzer prize winning six volume history, Jefferson and His Time is available in text and audio.  Meacham’s more recent Jefferson: The Art of Power (19 hours), is less detailed and has more recent updates on the impact of Jefferson’s slave holdings and resulting family.  Stephen Ambrose’s Undaunted Courage, which details the Lewis and Clark expedition, outlining Jefferson’s role in commissioning and studying its findings, provides further context on his role in extending the country through the Louisiana Purchase and systematically studying those holdings.  A visit to Monticello, Jefferson’s home, is essential to understanding his strengths as an artist, his struggles with slavery and the challenges he faced with his personal finances.  As a graduate of The University of Virginia, my personal list of Jefferson readings is longer – touring the University is also a great way to understand his vision.

James Madison.  Madison, as the legal and constitutional expert, is the driest of the early group to follow.  From a wealthy family, his value came from his study historical precedent and ability to serve as an adviser to Jefferson – these are best covered in the Gutzman text James Madison and the Making of America (16 hours).  A visit to Montpelier compliments any study of Madison.

Alexander Hamilton.  This is most recently covered in Chernow‘s biography, but the earlier McDonald text is very readable and quotable.  Of the founders, Hamilton and Franklin rose from the least to achieve the most.

Aaron Burr, covered in Fallen Founder, by Isenberg (20 hours).  Often over-looked, the third vice president, who served under Jefferson and was close to being either the second or third president, teaches many lessons about the role of early political organization in the growth of American democracy.

1 Response to Reading and Listening to Revolutionary America