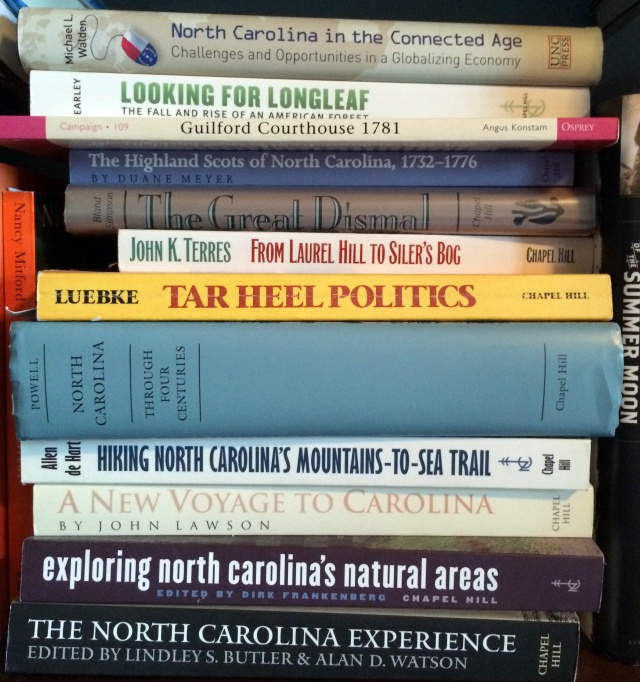 This portion of the book shelf was perfectly organized for this photo.

North Carolina has been our adopted home since 2001 – I’ve lived here longer than anywhere else (despite all the time I’ve spent on the road for work).  It is an interesting state with a long political, commercial and technical history.

North Carolina: Through Four Centuries is the most thorough conventional history of North Carolina.  Powell begins with the Native American population prior to the arrival of Columbus and takes the reader through the modern age.

A New Voyage to North Carolina is featured in Powell’s text – written in the days of European settlement, it served as propaganda that led to mass immigration.  Many of the main characters in La Verre’s Tuscarora War below, were attracted to North Carolina by this book.

Looking for Longleaf, by Earley, tells the history of the whole Southeast and North Carolina through the story of one of its most unique native species – the longleaf pine.

The Great Dismal, by Simpson, is like Looking for Longleaf, but focused instead on the Great Dismal swamp found in the state’s NE corner along the coast.

Tuscarora War, by David La Verre (10 hours) tells the story of a series of raids and battles in North Carolina beginning in 1711.  I’d also listed this book under a list on Revolutionary America.  Understanding the violence, roles of various immigrant groups and dependence on European resources for defense of the common purpose provides a framework for many of the dynamics that would lead to the revolution.

The Highland Scots of North Carolina tells the story of the settlement of North Carolina by the Scottish and brings the tale as far into the future as possible.  It has great detail on the Battle of Moore’s Creek Bridge, which is a must-visit site.

Guilford Courthouse 1781 – the Osprey series is well known for providing excellent detail of battles and military conflict.  For those who aren’t familiar with the Southern front of the Revolutionary War and Nathanael Greene, this is an excellent place to start.  The battlefield is also an excellent visit.

North Carolina in the Connected Age, was published in 2008 and it is startling how dated it is already in 2014.  Written prior to the downturn, the book divides out North Carolina’s industries and tries to lay out a plan going forward.  Known for having both the technology of RTP and its sister states to the NE, North Carolina also has the low cost labor environment of the states to the South which have attracted a resurgence in manufacturing.

Luebke’s Tarheel Politics also helps understand the modern governance structure of North Carolina and the context in which these institutions developed.  There is a more up to date text on this trope, The Paradox of Tarheel Politics, which has a Kindle version available.  I found the sections on the founding and funding of the Microelectronics Center of North Carolina (“MCNC”) which was the progenitor of NC Idea and Unitive, a company I was with, to be very helpful.[1]

[1]  MCNC has the honor of holding the sixth oldest .org URL, from January 1987 – only two weeks younger than DARPA itself.