(Read a Summary of the Whole Book)(Carnegie Video Short: Don’t Criticize or Complain)

“If You Want to Gather Honey, Don’t Kick Over the Beehive”

Criticizing does not work and often makes people perform worse. Avoid it. Stop doing the wrong thing in your personal interactions – it does not work.

Lincoln is first teed up as a repetition for use as persuasion. Carnegie also calls out his presence on the $5 bill.

“Don’t criticize them; they are just what we would be under similar circumstances.” Abraham Lincoln

“Under my coat is a weary heart, but a kind one—one that would do nobody any harm.” Crowley the murderer.

The point of the story is this: “Two Gun” Crowley didn’t blame himself for anything.

“Criticism is futile because it puts a person on the defensive and usually makes him strive to justify himself. Criticism is dangerous, because it wounds a person’s precious pride, hurts his sense of importance, and arouses resentment.”

“By criticizing, we do not make lasting changes and often incur resentment.”

“The resentment that criticism engenders can demoralize employees, family members and friends, and still not correct the situation that has been condemned.”

You will find examples of the futility of criticism bristling on a thousand pages of history.

With tears in his eyes, Taft said: “I don’t see how I could have done any differently from what I have.”

“There you are; human nature in action, wrongdoers, blaming everybody but themselves.

“What was the secret of Lincoln’s success in dealing with people?”

“And from that time on, he almost never criticized anybody for anything.”

“Don’t criticize them; they are just what we would be under similar circumstances.”

Lincoln to Meade after not pressing the fight after Gettysburg – “If I had gone up there, I could have whipped him myself.”

“Your golden opportunity is gone, and I am distressed immeasurably because of it.”

The next time we are tempted to admonish somebody, let’s pull a five-dollar bill out of our pocket, look at Lincoln’s picture on the bill, and ask, “How would Lincoln handle this problem if he had it?”

“Don’t complain about the snow on your neighbor’s roof,” said Confucius, “when your own doorstep is unclean.”

“Dictated but not read.”

Any fool can criticize, condemn and complain—and most fools do. But it takes character and self-control to be understanding and forgiving.

“A great man shows his greatness,” said Carlyle, “by the way he treats little men.”

Hoover – ““To show you I’m sure that you’ll never do this again, I want you to service my F-51 tomorrow.”

Father Forgets – a sad story of parents angry who don’t show compassion to their kids. 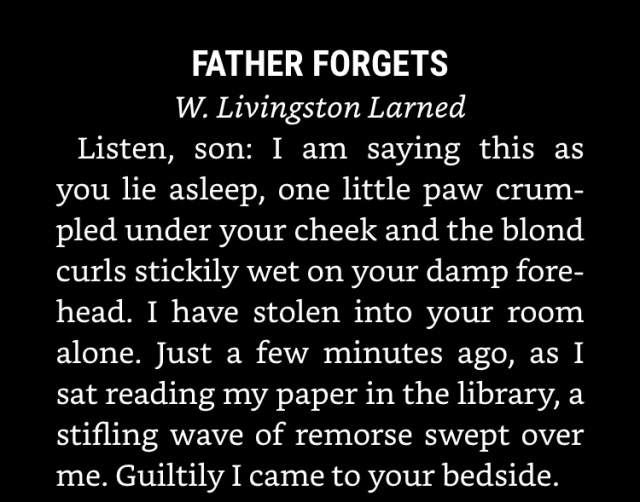 Instead of condemning people, let’s try to understand them.

Find me on twitter @flybrand.
View all posts by flybrand1976 →
This entry was posted in Books, Business, Marketing and tagged Carnegie, criticism, Failure, How to win friends and influence people, Lincoln, what not to do. Bookmark the permalink.